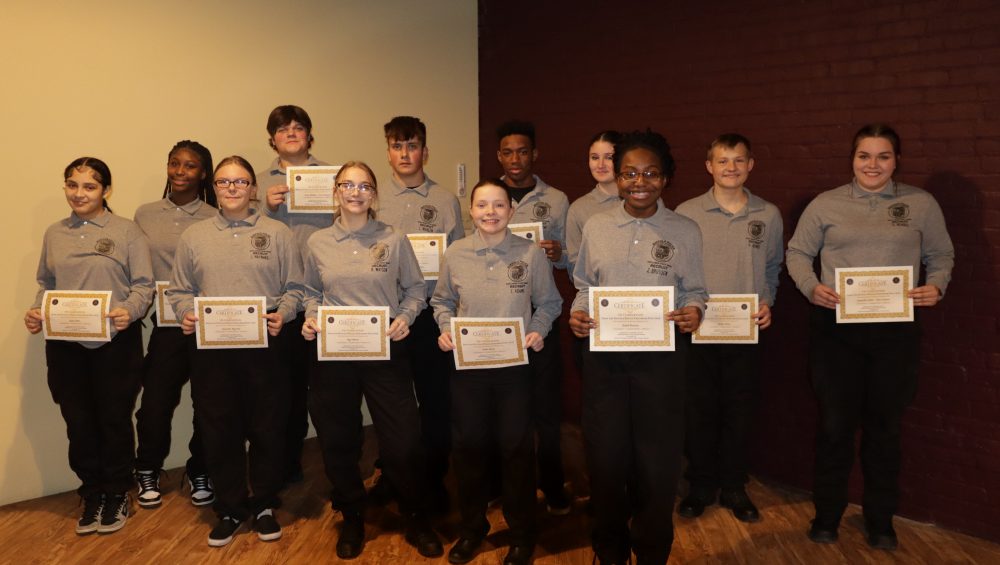 (BUFFALO, NY) – Tuesday, December 6, 2022, at the Larkin Commerce Center, 14 Buffalo Police Recruits graduated from the Buffalo Police Explorers (BPE) program led by Buffalo Police Officer Niko Davis. They were joined by friends, family, and local law enforcement officials in celebration of their accomplishments and personal growth over the past 12 weeks.

The explorers are youth living in Buffalo between the ages of 14-20 interested in learning more about law enforcement as a career path.

“This program helped me realize that I do for sure want to be in law enforcement,” says Samantha Herbst, who was elected Captain of the Buffalo Police Explorers by her fellow recruits earlier in the semester. “Since being in here, it made me realize this is definitely where I want to go. So I’m going to college for criminal justice and, after that, join my local sheriff’s office.”

Throughout the semester, they were exposed to many different professions within law enforcement, learned skills such as CPR and de-escalating tactics, and volunteered their time to help other organizations within the Western New York community. Joelle Bence, BPE Founder & Director of Finance, says the program is designed to instill the foundations of law enforcement in the youth and teach important life skills.

“I’m very proud of the Buffalo Police Explorers Recruits,” says Bence. “It’s very important that success is in the daily steps that they take and daily routine. Just by coming and being consistent every week, that’s contributing to who they’re eventually going to be as adults and how successful they’re going to be.”

This semester was Officer Niko Davis’ first time leading the class in the Executive Director of Explorers role. He says it was important for him as a leader to encourage every recruit to contribute their strengths when problem-solving and to be themselves to remind their community that there is a human behind the badge.

“For any explorer, you want to be who you are. Find a way to mesh the job with who you are,” says Officer Davis. “It’s so important to re-humanize the badge. You have that separation, you have that authority, and that’s fine. But everybody we interact with we want to understand as quick as possible that we are a human just like them.”

Lee Whitlock, a parent of one of the recruits, says the program was a great opportunity to see his son mature and gain role models in life.

“As a parent, I appreciate that the Buffalo P.D. chose to invest in these kids,” says Whitlock. “They didn’t have to. This is a lot of work and effort by many people to do this. It’s appreciated by the parents here today and myself that this kind of effort is put into the kids and to give them a chance to develop and experience law enforcement.”

Plans are currently underway for next semester’s program.

Buffalo Police Explorers fosters a relationship between Buffalo Police Officers and youth in the City of Buffalo by providing opportunities that promote leadership, confidence, self-discipline, and community service while developing an awareness of its purpose and objectives of law enforcement and the Buffalo Police Department. Learn more at buffalopoliceexplorers.com.